With so much social media to keep up with (as well as having to work for a living!) it does get a bit hectic trying to keep all the various streams updated.

The blog has in recent months become a bit of a casualty of the fact that I have too much to do and only one brain with which to do it all.

As such, this blog will not be updated for the forseeable future, but the 'unusual scots words' posts which seem to have been quite popular will continue in a slightly different format on my facebook page, which will keep getting updated more regularly with snippets about ancestry research and Scottish history.

Thank you to everyone who has sent kind comments and private messages to me about my blog posts - they are all greatly appreciated, and I hope to see you all on my facebook page at : http://www.facebook.com/find.my.scottish.ancestors

Kirsteen
Posted by Unknown at 12:11 No comments: 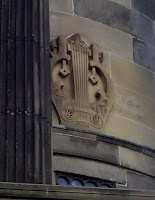 On a recent 'doors open day' here in Edinburgh (where buildings that the public often never see are opened for viewing, I took the opportunity to visit a wee gem of a structure that I had walked past many times, but never investigated: the monument to Robert Burns at Waterloo Place (just below Calton hill). 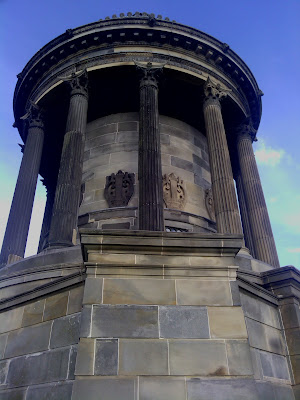 It's a beautiful Greek revival style building based on the Choragic Monument of Lysicrates in Athens and designed by Thomas Hamilton - the architect responsible for the (now sadly empty) Royal High School (itself just opposite the monument).

Originally it was built to house a statue of the poet, but the statue has long since departed and can now be found in the Scottish National Portrait Gallery.  Still, the building has a presence of its own and is well worth a look should the opportunity ever arise.

You can read more about the monument at the Edinburgh Museums Website.
Posted by Unknown at 10:50 No comments:

This word can be spelled 'ill-willy' or 'ill-wully' too and can mean bad-tempered or mean.

The Dictionary of the Scots Language (DSL) has a few examples of its use dating mostly from the 1700s onwards:

J Kelly's Complete Collection of Scottish Proverbs (1721) has the following:

An ill willy Cow should have short Horns.

and a later example from William Shelley's Flowers by the Wayside (1868):

Let dour ill-willie sit and fret, The while I lilt the ither sang.

It's another one of these words that is still in use, but not seen (or heard) all that often.  It seems probable that it is derived simply from 'ill-willed' - but I like the sound of 'ull-wullie' better!

I seem to be getting through the alphabet very quickly!  These posts are going to move to a monthly slot now in order to leave some space for some on other topics too.

Today's 'H' word is one that I have come across a fair few times in various documents:

This word has a huge variety of spellings and I list a few below - these variations can all start with 'Hak' 'Hack' 'Hag' 'Halk' or 'Hawk' (and a few other variations too!):

Hakbut
Hakbutt
Hakbute
Hakbuit
Hakbusch
This is not a specifically 'Scots word' as it is simply a variation of the French haquebute and usually refers to a type of musket which must have been commonly used across many countries.  the Dictionary of the Scots Language (DSL) has a few examples of its use dating mostly from the 1500s and 1600s and we can assume that it's use was mostly concentrated in these centuries.

There are also numerous examples of these weapons being referred to in original documents:

for example, a 1610 letter from James Campbell of Laweris, Ford[-], to the laird of Glenurquhay in the Breadalbane Muniments held by the National Records of Scotland records [NRS ref. GD112/39/21/25] states that the writer had "met Allister McKeindowy who shot a hagbut at them"

and another document from the same collection [NRS ref. GD112/10/1/1] records a tack by the laird of Glenurquhay to Patrick Dow, his son, "of two merkland of Corricharmish with grazing thereof, in Glenloquhay, for one year, he being diligent in keeping forest of Mamlorne, and shall not shoot with gun nor hagbut at deer, roe nor blackcock, neither himself nor those of his company, 19 April 1612".

So this odd looking word does crop up reasonably frequently in a variety of places and is worth remembering - especially when working with records dating from the 16th and 17th centuries - perhaps some of the more 'tumultuous' periods of Scottish and British history.
Posted by Unknown at 16:29 No comments:

Books that I recommend